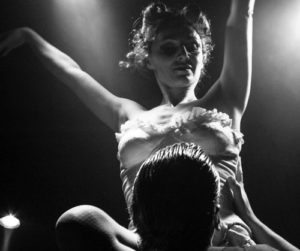 I like to think that I was once a lovely dancer. I have pictures to prove it. All those Benoni Times pictures and articles my mother saved… so I must have been fabulous, right? I hear Charlize Theron, herself a Benoni-ite, went to my very own contemporary dance studio. Isn’t that a testament to my teacher’s high standards?

I certainly strutted my stuff on stage from 3 years old to my last ballet class at 43. But how good I was will always be a possible figment of my imagination, unless you are talking to my mother which in itself would be a miracle since I lost her precious self in 2003.

I was hauled off to a Zumba class today by my friend Sara – years later. We panted happily for an hour whilst trying to keep up.  I looked around and saw the instructor, a mere slip of a girl with long hair and a seductive look on her face, sucking in her cheeks as she writhed. Her unusually hefty booty sure could twerk on cue, but as for the rest of us? Well! Sara, though awfully cute, is no Carmen Miranda, and the other ladies were just average klutzes getting fit or blissfully enjoying the music. No threat here!

I saw an old man of at least one hundred and three gazing into the clear-glass Zumba studio with a medicine ball between his legs. His eyes were of course fastened on the young snippet with the sexy look, but once a lead dancer always a… you get my drift. So, I sashayed up to the window in front of him, sucked in my own cheeks, and gave him a triple pirouette finishing with my hips seductively carving a figure eight, as I ran splayed fingers through my hair.

Now that’s what I call dancing! And it proves that old swans never die, they just flap less furiously.

Of course, after my swansong, so to speak, I had to bend down and catch my breath for four minutes. While my eyes were downcast, I saw the earring I had ripped from my bleeding earlobe and had to rush home to dab it with anti-bacterial cream and take three Aleve so I could walk without groaning for the rest of the afternoon. The old guy with the medicine ball MIGHT have been looking PAST me at the instructor when he dropped the ball. OR he could have seen my mid-section reach the mother of all wobbles, which as we all know, incredibly sexy. I didn’t have my contact lenses in, so I couldn’t quite see! And since I’m on a roll…maybe, just maybe, I only managed ONE pirouette.