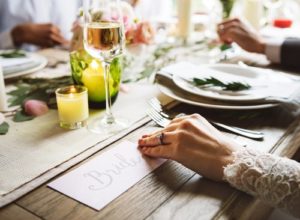 My husband, for the life of him, cannot remember names. It drives me dilly. I was brought up knowing to use names was simply polite, but to remember them was life essential.

Thirty-five years ago, my husband-to-be and I attended his annual company function held between Christmas and New Year. It was a gala affair starting in the anteroom where people sipped cocktails while spouses and significant others became acquainted. We were both super excited when my hunky reached into his suit pocket.

I knew what was coming. It had all been carefully planned. I had written out each guest’s name in my finest handwriting. Ours was a quick courtship, and I’d never met his staff. There were enough folks gathered around to cause the required stir, and so he began, his quiet tone louder than usual.

“I know you guys never thought you’d see the day…” he began with a modest flourish (‘modest’ only because that’s the way my fellow does things) he produced our wedding invitations from his suit pocket and waved them in the air, “…but when it’s right, it’s right.” He became quite coy as I fluttered doe eyes at the man I loved. The room buzzed with joy and people flocked to us to congratulate and snag one of the divine invitations. The love of my life continued on with an excited flow. “So, I want you all to meet the woman of my dreams….” I held my breath and felt my heart beating against my throat.

Yes indeed, in his most important moment, my husband-to-be introduced me by the name of his EX wife!

It’s true that I am my dear husband’s number two and you guessed it, Yvonne – a Nordic-looking beauty to make matters worse – was number one. But he told me their marriage ended by mutual consent. I had met him well after the gavel had divvied up properly, and I have no reason to believe there was any lingering ache on either side. But frankly, who cared about all that in the moment?

How we got through the rest of the night I’ll never know. I think we both blacked out as to what happened next. But what I do know is I must have loved him a hell of a lot after the faux pas of ALL freakin’ faux pas. It’s indeed a wonder that we were ever married after that fateful night!

As you might imagine, the man has at least 4,382 other redeeming qualities otherwise that anteroom may indeed have been the diabolical end to a wonderful beginning as wedding invitations were stuffed in his every orifice before I made my undignified exit.

And I ask myself, in spite of my ingrained importance for calling people by name being shattered in the mother-of-uncomfortable moments, what did I learn? 1.) I will answer to anything. 2.) I clearly forgive but never forget and 3.) My new name: “Honey” as anointed on that fateful night with cocktail in hand, has held my marriage together!