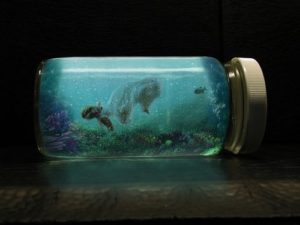 Chris, my editor, gave me much more credit than I deserve.

In the final chapter of War Serenade the birthday girl finds an appendix floating in a jar of formaldehyde. Chris wrote in the margin of my book, “Yuk. Did you make this up?”

Perhaps the odd keepsake never became popular across the pond.

Growing up in a British Colony, if you had your tonsils out, you could take them home in a jar. But tonsils became such a commonplace extraction; they were hardly worth the effort.

But an appendix? Now that was another matter!

The jar, filled with a gooey green substance, gave the off-white appendix the illusion of floating mysteriously, and if you swirled it, the disgusting white thing would dance in slow motion as if it was alive. It was gross, indeed, but that was the point. It was a detached body part, like Frankenstein, and a perfect way to scare your friends. The jar was stashed in a “memory box” hidden in the garage till the next generation said “Yuk” as they twirled the jar, grossing each other out, before they threw away the bottle, very, very carefully.

We were in the USA quite a few years before we could afford a visit to an American dentist. I was horrified when both the dentist and his assistant donned surgical masks for a filling. I came home ashamed. “Honey,” I said quietly to get his full attention, “does my breath stink?” He laughed at the silly question and even more at the reason for it.

All our lives, this is how it went. It started off as a social, then the dentist asked where it hurt. Once you were in the leather chair, your whole body vertical with the stained ceiling, the dentist got down and dirty in your mouth, hooking and probing with his lethal instrument, looking for holes. (Many of which I think may have been created right there!) You managed to chat through your mouth’s distortion, entertaining the guy until he filled your mouth with cotton wool to shut you up once and for all. (Or so it went in my case.) Then, likely to help him concentrate, he’d light a cigarette.

I still have visions of the hot end of the ciggie dandling ash over the region of my nose as he worked furiously.  Solid silver still anchors my jaw in my lower back molars, filled by my South African dentist. That silver is not giving up and I swear the heavy metal makes it easy for me to have a jaw-dropping reaction.

After this, you are probably shaking your head about South Africa being a third world country and all…but not so fast, my American friend!

Please remember the First Heart Transplant was pioneered in my home county. So, we weren’t medically backward, it was the serious body parts we were concentrating on – the ones we could keep in a jar!

And what do Dr. Christian Barnard and I have in common, you may ask? Well! Wait till you read War Serenade. It’s got some serious heart!