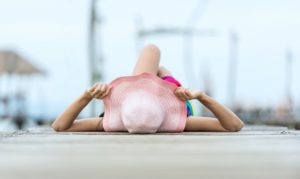 I was born with a caul. A stash-able body part with a Wow-Factor, I believe. I join Alexander the Great, Liberace, Lord Byron, to mention but a few. Imagine were I to join the ranks of such greatness because of a thin, filmy membrane, the remnants of the amniotic sac no less, that covered my head when I was born? Wow!

According to my mother, the midwife who delivered me nearly fainted with delight when she saw my caul. Seeing my whole head covered with shimmery coating all the way down to my neck, the midwife cried out, clasping her hands together in delight “She’s a Caulbearer. She has The Gift.”

My mother watched in part awe, part horror, the tradition of “Gathering The Caul.” The midwife rubbed a sheet of paper across my head and face, gently pressing the caul onto the paper so it would adhere, and she could pull it off. I imagine a plastic bag being pulled off my head, so I can’t breathe. No wonder I’m claustrophobic! And it’s A Gift in itself I don’t duck when a piece of paper comes near my face! I believe the nurse then carefully wrapped the paper encasing the membrane into her own silk scarf. “I’m sailing back to Ireland in a week,” she exclaimed, “and
this will keep me from drowning.”

For centuries, cauls were highly prized by sailors. Dickens references David Copperfield’s caul advertised and sold for a princely sum to prevent drowning in the eighteen hundreds. But the superstition is as old as time. The Poles called it “Born with a Bonnet,” and in Russian folklore, it means the wearer of same is “born lucky” and applies to someone who is oblivious to pending disaster that is avoided through luck as if the birth caul persists as supernatural armor. In Romanian legend, Caulbearers became vampires upon death. Well, a different kind of adventure to look forward to, I suppose…Who would have thunk such a thin membrane, known as “The Veil” could cause such a fuss? No doubt my mother could have paid for the midlife’s services with my crowning glory had she known!

When I was very little, I’d see things – horrible things I didn’t want to see – and I would call for my mother, shivering in fear. She’d hold me, soothe me, but she’d never say I was imagining things, rather I’d hear her whisper to whoever was around, “Jill was born with a caul.” I could feel her shoulders shrug in resignation. “It happens,” she’d state simply. The wearer of the veil is meant to have psychic abilities. I can’t imagine why my so-called gifts weren’t fully exploited to contribute to our annual holiday fund. I can just see me in a turban with hooped earrings and a crystal ball doing the carnival circuit. It would be a hell of a thing if I ever found out my midwife’s ship sank in the Atlantic on her way back to her birthplace. Ignorance is bliss, I suppose, and for that reason, I consider myself very, very lucky.