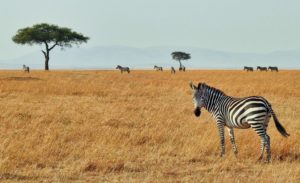 As a screenwriter, in the midst of trying to get War Serenade made into a film, not even real estate could successfully distract me from the drama of director & producers while attempting to find the backing to make the movie!

But I found the cure. My husband and I worked on a new script together. “Ties that Bind”, “Blood Brothers”, “Elephants Never Forget”, “Bound as Brothers” it was all the same story. In essence, it’s Athol’s story, and I think a fascinating one. I hope you will, too.

Athol grew up in the treacherous mountain range in South Africa called The Drakensburg. At just 4 years old, when his parents bought and ran a remote resort hotel, the young Athol was entrusted to a 13-year-old Zulu herdsman named Papin.

Athol spoke fluent Zulu long before he spoke proper English. But more than just his language, Papin taught the youngster the ways of the wild – how to find animals, how to identify them, how to move like them so as not to scare them away, and how to track them.

Life and different opportunities separated the boys as men:

Athol performed his compulsory 2-year army stint like all other matriculated South African boys, and Papin was lured by the promise of a new, all-powerful black regime backed by Russia and China’s money and arms.

The book will ask this question: What if Zulu blood brothers, one black, one white, one a terrorist, one a South African Defense Force Lieutenant, both tarnished by their own realities during the struggle for power were to face each other on the battlefield? Would they remember their Zulu ceremony to celebrate their unusual bond and their friendship that spanned 15-years?

As a script, this story was entered into two competitions in 2007/8. It came third in The Blue Cat Screenwriting Competition and made quarterfinals in The Slamdance Film Festival in 2007. The competition reader noted: “I am dazzled by a story that not only teaches me about Zulu culture but has enough action, thrills and great fistfights to satisfy the action junkie in me. Get this into the hands of Sir Richard Attenborough post-haste! It has a good shot at becoming a very entertaining, powerful film.”

In this marriage of fact (Athol) and fiction (Jill) our goal is to tell a story of a great friendship that moves you, one way or another.

By the way, I am having a devil of a time convincing Athol that we should include some romance. But I nag well, as he will attest, so my quest continues…

I would love to hear your thoughts on what this book should be called.

Email your ideas to jillwallaceauthor@gmail.com.
Please write NAME OF NEW BOOK in the subject line.

I’m excited to hear from you, and promise I shall share your ideas with my trusty co-writer!