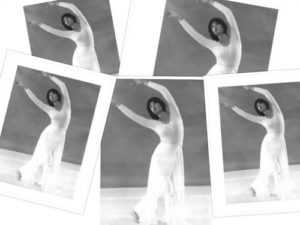 My stage debut was at age 3. It was my first solo, but it was the curtsy I practiced, even more than the butterfly number itself.

My ballet teacher took pains to explain how the curtsy was the most important part of the performance. It showed humility and grace whilst receiving applause. But, she warned, audience appreciation was not automatic. It was earned. If you did anything less than your very best on stage, then your head should be bowed in shame because only polite applause would result. And any self-respecting ballerina should hang up her ballet shoes.

And so, it was that I flapped hither and thither across the stage, my sequined chiffon butterfly wings spread and undulating from stage left to stage right all for the ultimate goal of roaring applause. I couldn’t wait to curtsy because I was earning every clap. I looked like a butterfly, I felt like a butterfly. And, if I had to be frank, I was showing off my mom’s home-sewn sparkle to perfection.

But then, in the dim light of the church hall, I saw my Dad. His rugged, tanned face beamed, and nothing could stop me being held in his arms. And so, the most-practiced-curtsy-by-a-three-year-old was abandoned in favor of her daddy’s loving embrace. All the bravos and standing ovations in recorded history couldn’t top that!

Through the years, he was always there on opening night. I easily found him in the dim light of the audience, a few rows from the front, leaning forward in rapture – even when I was hidden in the corps de ballet, plucking swan feathers out of my ears.

When I was 20 and he a young 54, he had multiple blood clots that caused complications. He was hospitalized for the longest six weeks of my life. I lived for the day he would come home.

Each time we visited, I regaled him with stories of our up-coming dance theatre which was to run for a week. Henri Noppe was the most innovative modern ballet and jazz teacher around. He dreamed up out-of-the-box numbers that consistently blew conservative minds: White-clad Angels on gold pointe gracefully executed their pas de deux whilst I as Lucifer, in a red tie-dyed, red leotard, heaved grotesquely. We – hell and heaven – fought over the dying man – Henri’s soul; As “The Scarlet Woman” I taunted the men of the town while the drab, veiled women planned my suitably hot demise.  But the piece de resistance of nearly two decades of dance was a Henri-esque masterpiece dreamed up to challenge me. Called “Solitaire” it was an abstract adagio that pushed me far beyond my technical ability.

As soon as I had something visual to show my dad, I raced to the hospital with newspaper in hand. If anything could make him feel better…

My father’s pallor matched the starched white sheets, but as I whipped out the front page coverage of “Solitaire,” his proud grin wiped away the frown of pain, recently etched into his beloved face. My heart eased.

But, without so much as a whisper of warning, he was taken from us.

He was never coming home.

Two days before opening night of Henri’s provocative “Experimental Dance Theatre” gone was my nucleus and my heart – ripped open and raw – threatened never to beat the same again.

Our home was a revolving door of friends and loved ones, heads shaking in disbelief, but they could leave our place of shock to resume their normalcy, and we were left with dying flowers and the overwhelming fear of life without him.

Our huge teak dining room table was weighed down by untouched dishes, delivered with love and in lieu of inadequate words that could never articulate the shock of drastic, sudden loss.

There sat Henri, my mom, and me, the day before opening night.

“Jill must dance.” My mother delivered the instruction in a monotone.

“Mom?” Had my mother’s mind scrambled before we’d even laid my father to rest?

“She MUST dance. It’s what her father would expect.”

Whoever could argue with that? Neither Henri nor I had the courage. Nobody pissed off Iris. Clearly, I had no say in the matter.

It’s the only opening night I never wanted to remember, yet I vaguely recollect dancing all the numbers. But I couldn’t stop my eyes searching for that familiar face and finding nothing but darkness. Forgetting steps was usually a cardinal sin, but my fellow dancers helped me muddle through. The show must go on, after all. Ask my mother.

Nearly time for “Solitaire,” and the night was almost over.  I dressed in a trance – a Zombie in white.

Once in the wings, I was struck by an odd quiet. No dressers, no dancers, no backstage fuss, no limbering, no resin being crunched. No hard breathing. No whispered French terms as complicated steps were mentally rehearsed. Not a soul, not a sound.

Henri had given me the respect of quiet in which I could reverently say my goodbye.

The eerie music, to which I’d rehearsed for so long, began. The haunting flute was shrouded in melancholy. I felt my body move, unbidden.

…I danced until I felt…

And I felt my dad.

Extended as far as humanly possible, I felt his strength enter the gaps between sinew and bone as muscles pulled to nigh breaking point. I danced until my heart burned as it reassembled then became ripe and ready to explode with love and gratitude – because in those moments of sublime commitment to honor the man I adored – I understood that he would never, ever, leave me.

My right hand was on my heart when I looked up into the blackness and saw his face, leaning forward intently. And I knew with all that was my truth that my Dad would always be in my auditorium, giving me the strength I needed. And once I’d achieved what I set out to do – I’d see his face, proud and smiling with his arms open wide.

I never danced “Solitaire” again. There was no need.  I’ve never been alone since.