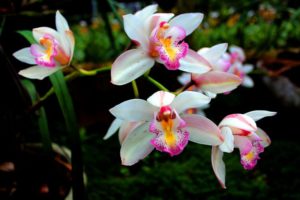 Life rolled out a cow pasture of disappointments in the last couple of weeks. Acres of my world were layered in the foulest-smelling manure. But as I gagged on the stench, I saw one green leaf…Wait…and then another emerged in two different places between turds.

Life’s clever you see; it knows it better give you something solid to hang onto when you are ear-deep in poop, to ensure you stay in the game.

And so, it was that out of the fertilizer, two exquisite orchids grew. They were so perfect and so colorful, yet so markedly different, they would not only be forever remembered, but their fragrance and beauty successfully removed every trace of stench. It was indeed a miracle.

Let’s start at the beginning…

We sold a riverfront home to a wonderful couple a month or so ago. It was such a quick listing and sale; I didn’t get to meet the buyers face to face before closing. Geoff is an engineer with a passion for restoring mid-century-modern homes, and Amanda is a charming and delightful young woman, who works for NASA. A more down-to-earth, unassuming pair you could never wish to meet. As we wrapped things up, Amanda asked, “Have you ever been to a launch?” A ROCKET LAUNCH? Of course not. That’s a privilege very few get to brag about.

I meet many people buying and selling homes. During their experience, some allow me to take them under my wing and guide them till their nest in their new tree is ready; or they can fly their old coop, free and unencumbered toward adventures in a different forest.

In the 2 or 3 months we work together, I worry about them day and night. They become my children. So, it’s an understatement that by the time they closed on their home, we are close.

When it’s all said and done, they promise we’ll get together soon…but like our own children whose intentions are true, new experiences will soon consume them.  I smile and nod ‘sounds great’ but have no expectations. Their promised dinner invitations will never come, but that won’t impede on how much I will forever adore them. Truth is, whenever it is we see each other again, we’ll be genuinely thrilled.

Our riverfront listing and sale was an anomaly. It was so quick, I almost regretted not having the time to get to know lovely Amanda and Geoff. Two weeks after this closing, I received a personalized VIP invitation from Amanda for Athol and I to watch the upcoming rocket launch.

Once because somebody did what they promised to do, and a second time because…Well! What could BE more exciting? And how DID the lovely young Amanda pull this off? But I didn’t linger on that…YES, YES, & YES PLEASE, I answered. My Athol and I were like little kids anticipating their first sighting of a secret utopia.

And so, we found ourselves in the crowded earth-bound galaxy: The Kennedy Space Center. We stood in the bus line to take us to the VIP Launch Viewing Area. We felt so very important. As our line snaked in and out of the shade, two attractive folks in their very early sunset years joined the queue behind us. “You wouldn’t be Amanda’s parents, would you?” I took a vague stab – silly – there were thousands there. What were the chances…. “Yes, we are!” said Skip & Connie!

In that very moment, our excitement turned to unbridled awe and our already out-of-this-world anticipation, became real-life-drama.

We learned that Skip and Connie’s petite, personable, unassuming, youthful, cute-as-a-button daughter, is the Manager for NASA who oversees domestic commercial launch services for robotic missions! Her name and face share a wall with first director of the space center, Kurt Dubus and a long list of shining stars!

Our mouths hung open in amazement. Not only had this sweet person followed through – and even MORE impressive – which in my book is really saying something – she’d head of the American Space delegation to Russia, received NASA’s Outstanding Leadership medal and has worked for NASA for 30 years!

The moral of the story? Never judge a deeply complex astronautic book by its very cute cover!

We settled on the top of the bleachers and seat-bopped to the excellent opening act – music from the 60’s and 70’s “Spirit in the Sky”, “Rocket Man”, “Major Tom” and still couldn’t believe we were about to be blown away by an as-close-as-it-gets view of the SpaceX Falcon 9 rocket launching TESS – the Transiting Exoplanet Survey Satellite – into orbit, to search for other solar systems and habitable planets. Now that was an all-time high, if you’ll pardon the pun.

We discovered that osmosis is a beautiful thing.  Because of the lovely Connie and Skip, we were happily awash in pride – imagine your daughter being responsible for the high-powered rocket that was about to launch an orbital payload! We could, thanks to them! And as the countdown continued, we were ridiculously nervous that “our” Amanda’s rocket would perform on cue. We were fairly quivering in anticipation just like the giant rocket seemed to after her fuel injection. Connie and Skip had us fully invested. This had to go well for our Amanda.

My husband glibly pointed out that our IQs must surely be the very lowest on those bleachers since we sat amongst the MIT engineers and contributing launch partners, not to mention the two people who birthed the woman who helped launch TESS into orbit! To prove his point, all I could say, as a humongous fireball surrounded the rocket, was “Wow…Wow…” and “WOW!” I know, I know. Finding fabulous phrases is my thing…but I know my limitations!

And then it was LIFT OFF and our bodies involuntarily rose as our eyes and ears and nerves and hearts swelled with the impossibility of it all.  YOU DID IT, AMANDA, we shouted at the giant white, billowing cotton-puffs that marked the darkening sky. They were all that was left of the powerful man-made miracle’s upward soar. YOU DID IT! And we got to witness it all. WOW!

A week later, the second of the exquisite orchids rose out of that mire as my friend Tammi and I, like two planets in a vast solar system, orbited the star that is my girl, PINK, live in concert!

Again, miles from the action, but this time due to lack of funds and not fear of rocket-debris, we planted our bums on precariously angled seats way up in the stratosphere of the Amway Arena. Hmmm. There was another notable difference…we easily had the highest IQ in row 9 section NOSEBLEED.

As concertgoers will attest, $300 a piece won’t get you much on a hot summer tour. We looked at the thimble-sized stage and wished for a much bigger budget or indeed “our” perfect PINK, rather than this petite pixie. We needed an Amazonian woman who made a definite dent in the GIANT jumbotron, so we could actually SEE her.

Here is a powerhouse whose voice is so big it could have brought down the city of Troy, but we needed her voice to bring down the city of Orlando or at least to reach row 9 section NB.  It’s true, light travels faster than sound (Oy vey, how long can I bask in Falcon 9’s after-glow?). This was proven by Pink’s big-screen-mouth forming a lyric and her raspy note filling our ears a millisecond later. But hell, who really cared? WE WERE THERE, and it was awesome!

Life has a mean way of making me keep the faith. The moral of the story for the week is this: When you think the manure can’t get any deeper – it does – and when you’re just about to give up, flop back and let the stench overtake you, the telling green of better things pokes at your peripheral vision. Take a good look. It may just be a blooming orchid. Or two!