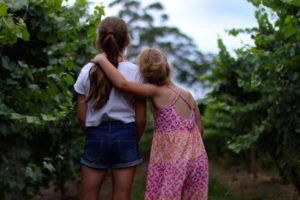 My sister Vivienne is a peculiar soul.

We are as different as rock ‘n roll and baroque. The fact that we share only a mother has never been an issue. She is my sibling all-the-way, besides, there is nothing HALF about my sister!

Eleven years older than I, and the youngest of the first three of my mother’s children, Viv was entirely pissed off when I was born. She stayed a tad put-out for quite some time. How dare I take over the last spot when there was no bloody vacancy?

The family hadn’t seen each other for over a year when my brother and sister came to visit two weeks after I was born. Distances were too great to navigate in those days and money was tight. Phones were seldom used. Letters were the tool of communication, so it was easy to keep secrets.

On the way home from the station, my mom told them there was a surprise waiting. Viv asked if it was a little monkey. My Mom said, “something like that.” Understandably my eleven-year-old sister was disappointed when she saw me.

Vivienne, or Fifi as she’s known to me, went to Rondebosch Girls High in Cape Town, far from Windhoek where we lived, and miles from her father’s home too. My mom constantly reminded Viv what a super-expensive girl’s boarding school she’d been lucky enough to attend, but nobody gave thought to the fact that no matter how exclusive, it was still a BOARDING SCHOOL. I’m sure Viv would have traded every moment at her posh school for a family to come home to every day.

A few years later, Viv came to stay with us to finish high school at the convent. Viv was in the 11th grade and I was in 1st grade and we shared the same campus. Having won a silver medal at the annual elocution competition (they MUST have been short of winners that year, clearly!) the nuns put me on a balcony overlooking the entire assembly to recite my not-so-winning-poem. I was sans top teeth at 6 so there was likely a lot of tittering from the bitches below as I lisped my way through “Timothy Tim.”  It wasn’t good for her rebel soul, and I swear Viv’s taunts still echo in my head.

I remember Umbra, Viv’s mottled grey horse she’d rescued from the glue factory, being washed and brushed in our front suburban yard. He wore a constant purple beard because she fed him Fanta Grape from a bottle.  My sister is an ardent animal lover. It runs in the family.

Unbeknown to my folks, Viv was way too cool to catch the school bus and was eventually caught arriving for class on the back of her boyfriend’s motorcycle. After parent-meetings and stern warnings from Mother Superior during the months she was there, Viv was expelled for smoking in the toilet. Viv blamed me for her expulsion because I’d raised an enthusiastic hand during assembly when the nuns called for empty liquor bottles for backdrops in the school play. She may have been right. No doubt my enthusiasm for our family’s ability to consume liquor as well as my sister’s delinquent leanings were collectively not in sync with the convent’s moral code!

Soon after Viv left, I was “caught” sharpening a pencil during a lesson. Apparently, a cardinal sin. Who knew? Lying across the offended nun’s lap so she could beat me with a hairbrush, I wet her habit. My father said, “serves the bitch right,” whilst our mom lamented, “Oh, how unjustly we pay for the sins of our sisters.” The good news?  Public school was a lot less uptight.

Hell, even Viv may have survived at my co-ed school – but we’ll never know – because smoking not only gets you expelled but makes you pregnant. Or so it seemed to this seven-year-old. With no decent social alternative in the early 60ies, my sister had to get married. Shame and shock toppled my parents’ social status for a minute.

Viv moved 500 miles away to where her husband found a job. Life was peaceful, but I missed my crazy sis. One school holiday I visited them in their tiny house with their two rambunctious little boys. I remember finding a knife under my sister’s pillow, seeing her bruises and being sworn to secrecy. Hard for a ten-year-old, but I managed. I’d learned the dire fate of a messenger in the convent quadrangle.

Viv followed us across the country when my parents and I moved, dragging along her still squabbling boys. She finally confessed her years of abuse suffered by her husband’s fists. My dad who was Viv’s ardent supporter threatened to “knock his block off.” Her husband drove over 1500 kilometers to beg her to come home. She refused. On the way back, he had a fatal car accident, and the boys were left fatherless.

From my 12th birthday onward, Viv and the boys were constantly in and out of our house. My Dad forever defended my sister for any bad decisions as our mother’s “Oh, Vivienne!” was followed by a shuddering sigh of resignation.

A short time later, Viv married a fine-looking man – but one she could manipulate. She had her third son, Charl, a most beautiful boy who turned into a handsome, gentle man with three kids of his own.

Though Viv quickly bored of #2, Charl was her light.

Fifi had a 12-year affair with a married musician. He finally got divorced and we thought, “Finally, Viv will get her bliss.” But he ran off with a different woman before the divorce was final! “Oh, Vivienne!” (Sigh.)

Viv escaped to the quiet of the mountains but minutes later got hitched to #3. A hippy dude with a farm in the middle of nowhere. Perfect for Viv. The farm. Not the husband.

Excellent at running away, my sister started a new life in the UK at the ripe age of 56. She didn’t know a soul in the whole of the northern hemisphere. She’d never been out of South Africa. But she wasn’t afraid.  She’s never been afraid of anything.

She is nothing if not the bravest woman I have ever known.

She worked as a bookkeeper throughout England and Wales, settling in Cardiff where she established her own bookkeeping business. Without warning, her Charl suffered a brain aneurysm at 39. From a school of the hardest knocks, what could be worse than my sister losing a child?

Vivienne is selfish and bright, funny and brave as can be. She’s also a little crazy, totally self-absorbed, and lately a self-confessed recluse. Who the hell can blame her?

Though she says she prefers animals to people, Fifi would much rather talk than listen. But then, why should she care, nobody’s ever really listened to her.

She’s stolen my clothes, my makeup, and my friends over the years, but I love her still. She also stole part of my dad’s heart, but I was okay with that.

Viv has taught me about reincarnation. Not because she believes in it necessarily, but because I can’t imagine anyone enduring a life as heart-wrenching as hers, without breaking even. My sister’s either paying a million karmic debts for a wicked past or earning a million for her next earthly-go-round where she’ll float through life, gorgeous and happy.

So, this week I celebrate my sister for her soft heart and her ability to dive into everything head-first, regardless of who thinks she shouldn’t.

I celebrate her tenacity and her ability to keep going in spite of all the mounds of dung she’s had to climb.

I honor her for her wildness – just watching her quelled that streak in me.

I honor her for all the lessons she’s taught me just by watching her do life.

I honor her for the years we’ve shared and the people we’ve both loved and lost.

I honor her for being my sister and loving me in spite of stealing that last, most coveted spot.

Fifi, this little monkey loves you. My life sure would have been dull without you!