Eleven months later I was born. I was an accident, but my mom assured me, a happy one. She said I kept her young.

She was 40 when she had me. Fortunately for me, though all my friends’ mothers were 15 or more years younger than mine, it never felt that way.

My mom was still young at 86 when we lost her.

My mother had an uncanny ability to relate to everyone she met: young, old, man, woman, gay, straight. She talked everyone’s language. She never, ever judged. She treated everyone the same until they proved themselves unworthy of her attention. She loved people and they loved her. She was funny and bright and cunning. She played the piano like an entertainer. She wore her heart on her sleeve except where my father was concerned. The man never knew where he stood and spent 25 years wooing her. The unpredictability of his redhead was probably the very thing that stopped him from losing interest – and she knew it.

I remember them dancing to their song “La Vie en Rose” in the hallway. Often my dad would whisper just a bar or two then dip my mom deeply and kiss her in the kitchen.

Once I saw my volatile mother throwing plates at my dad’s head. Sometimes there were muffled angry voices after which a silence descended on our home and I was the intermediary – required to pass the salt at our table of three.

Most of the time they liked each other, but nobody took anything for granted as far as peace and quiet were concerned in my house. My mother could blow at any minute. Of course, in those days there were no drugs for “the change.” You just, well…changed, and the rest of your nucleus ducked.

Growing up, my mom was never demonstrative to me. She left that to my dad who never spared his affections towards us both. When we lost him so abruptly, I bet my mom regretted not telling him how much she loved him. Not that she ever confessed, but it was the only logical reason I have for why my mom changed at 61 and became the loving mother I’d always longed for.

The world adored my mother. I wanted to grow up to be just like her, even now – at 61 it is she who inspires me.

Lanie and Kitty grew up with me and loved my mother unconditionally. They looked in on her and showered her with love for 16 years while I was overseas.

25 years after we lost my dad, my mom fell and broke her hip. My girls followed her ambulance to the hospital and called me en route. I was on the next plane home to South Africa.

All her life my mom promised us that she’d never allow herself to be incapacitated; she said she’d rather die than be a burden on anyone.

There was no one more stubborn than Iris, and she would never break a promise.

She simply refused to get well enough to have her hip replaced. She knew her recovery time would rob her of her independence and Iris Mary Fuller van Niekerk would have none of it.

She drifted in and out of consciousness for three weeks. One of my girls drove me to the hospital each morning. It took whoever was “on duty” 3 hours to get to the hospital and back. 6 hours later, another would fetch me. Imagine the huge sacrifice they made for me – but neither ever mentioned the huge dent made in their own lives to accommodate my urgent need.

I spent the days chatting and singing to my comatose mom. I have a lousy voice, but we used to love to sing together – loud and off-key.  She’d wake up every now and then and say something “Profoundly Iris.” Even then she was charming and delightful.

But she opened her eyes less and less, and my aching heart grew heavier. I was terrified of losing her. She was my friend. My mom. My champion. 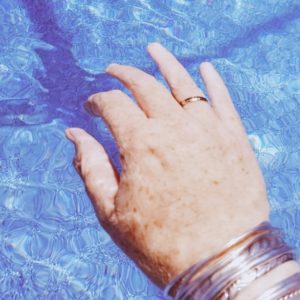 As I write this, 15 years later, my heart breaks all over again. What a loss. What a terrible loss.

Lanie was with me when, after three weeks in this state, we knew her life on this earth was over. She was nothing but skin and bone. Even her veins refused to circulate the juice that kept her alive. Her arm blew up like a balloon refusing the essential nutrients. Stubborn. Determined. That’s our Iris.

Wordlessly, Lanie and I watched as she struggled to get safely to the other side.

She opened her eyes for the first time that 28th day of July and said: “Peter says hello.” I imagined my dad at the entrance to the tunnel that promised light at the end, his big hand outstretched. I imagined her taking his hand. It was the only way I could face letting her go. After all, I got to keep her twice as long as my Dad. It was his turn to enjoy her remarkable spirit in all its splendor.

We called the family, but by the time they got there, my beloved mother was gone. Horrendous sadness and the horrific loss dropped on my head like a bus every single day for a long, long time. Nobody can ever say that because somebody is old it’s not a tragedy. I assure you; it is to those of us left behind.

Since nobody but me wanted my Mom’s wedding ring, I brought it home to Florida. My heart was broken, and yet I felt sublimely grateful that my mom got to die as she had lived: Bravely, independently, and on her own terms.

My mom’s ring was too small for my finger. I wanted it close to me. I schlepped from jewelry store to jewelry store, looking for a gold and silver chain, thin enough not to overwhelm the ring’s understated elegance. I hunted in vain for months on end.

I was in Wal-Mart looking for curlers or something equally as mundane. The jewelry counter seemed to appear in front of me. I looked into the glass case halfheartedly.

And there it was. The very chain I was looking for.

The bored lady took it out of the case and handed it to me. I pulled the ring out of my purse, and literally, as I placed it on the chain, “La Vie en Rose” blared over the loudspeakers of Wal-Mart.

But then… just as you don’t need music to dip and kiss the woman you love, so it is that you don’t need to be anywhere special to get a sure sign that those who’ve passed are close by. And what better way than a favorite love song to accept and be assured that they are together again, at last, dancing in the kitchen on high.