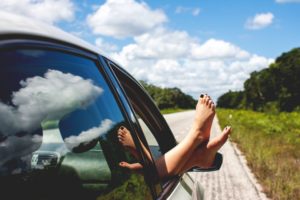 It was the first night of Debbie’s short stay with her daughter Sally on the west coast. When Sally’s boyfriend, Jack popped by her modest apartment after work, he immediately took off his shoes and put his sock-clad feet up on the coffee table.

Debbie thought, “Hmm, that’s a bit rude. I’ve just met the guy!” But as we all know, we’re not allowed to rush to judgment as far as our children’s/best friend’s/mother’s new significant others are concerned.

“Ah, to walk a mile in someone else’s socks,” said Jack and giggles turned into guffaws.

“What’s up?” asked my friend, when she really wanted to shout, “What the hell, you guys?!”

The pair exchanged looks, nodded then huddled in toward Debbie as if the condo was bugged by the FBI.

“Well, one night after work, Jack was rubbing my feet,” said Sally. Debbie was all about being liberal and cool – but being made to listen to Jack’s upward progression of her daughters…oh, please no!

“And I said, ‘You should be a foot model.’” Jack grinned. Debbie relaxed just a smidgeon.

Remembering, Sally laughed and laughed. “And I said, ‘You’re crazy! I have fat feet!’”

“Hey! They’re cute and dexterous and interesting. Anyway, I asked Sally to let me prove her feet were worthy of some respect.”

“So, without further ado, Jack whipped out his phone and took pictures of my feet. Thank God I’d just had my toes done,” explained Sally.

“Mom, you won’t believe it,” Sally began, her face shining with glee.

Jack finished proudly “Within the hour, your daughter’s phone BLEW UP with hundreds of elated responses and ardent requests for more.”

Not one to let grass grow under her footsies, Sally had established a PayPal Account, secured a dedicated, untraceable phone number, and Jack became Verizon’s version of Ansel Adams. Viola! They were in the Foot Fetish business. What a kick!

Unabashed and well into the swing of things, Debbie suggested a concept for a shocking video. Ansel…Jack clicked his phone to photo-mode and Debbie directed.

Sally under her mother’s expert guidance, teased off her first ankle sock using “poetic hands.” They were having so much fun, Jack had to stuff socks into their giggling mouths so the ambiance wouldn’t be destroyed.

Then began the many toe-wiggling “attempts” as the bare five “tried” again and again to remove the second sock until – at last – the pesky cotton covering s-l-o-w-l-y slithered off exposing the final five. Viola! Delectable, unabashed and (gasp) quite naked! How naughty!

They waited less than a minute. Sally’s “business phone” lit up with urgent pleas for more. Private show requests pinged in.  Who wudda thunk! And (snap) just like that, Sally and Jack’s Foot-Art walked them into the second phase of their accidental business plan.

Apparently such wicked strictly-below-the-knee-debauchery warrants a hefty wad of Yen which translates nicely into good old dollars via PayPal!

Now, with music for ambiance, Sally’s little piggies can be seen squishing around in chocolate; being smothered in oil v-e-r-y slowly; and wiggling excitedly through bath bubbles.

I hear if you lie on your tummy, feet together with your crinkled, naked soles exposed – it makes queer folk quiver in Quebec.

Good news is if you have a cell phone, supple appendages, and a touch of imagination, you’re in business! If your toes have personality, well that will help to substantially plump the coffers. And a huge bonus, salon pedicures are tax deductible!

And all you single ladies, guess what? You don’t need a partner for your new venture. No Siree, you can be your own Ansel Adams! Except for the Quebec-preferred shot – DO NOT attempt to twist backwards to take the pic on your own – unless of course, you’re a contortionist or have a crush on a chiropractor.

So girls! Take off that pantyhose! Shave those legs! Paint those gnarly old toes, wiggle and wag them, and make some money already! A whacky world’s waiting on your debauched, dexterous digits.

We’re glad he brought it up – because it gave us a shoe in on this no-capital-required-money-making-adventure – but what was Jack bragging about “working two jobs?”

Well, after Debby’s directorial debut, Jack removed “his” socks at the end of that first evening, and placed them into the zip-lock bag Sally held open.

“Some overseas stamps and Ka…ching!” said Jack, “Those little stinkers will go a long way to boost our vacay budget!”

Sally explained “This guy – Thijs – in Holland, sent me his socks and payment in advance to wear them and send back to him.”

My friend pointed at Jack’s feet “Foot Fault!” and raised an eyebrow. “Isn’t that cheating?”

“Ah,” thought Debbie. “How enterprising. These kids are thinking right out of the (shoe).”