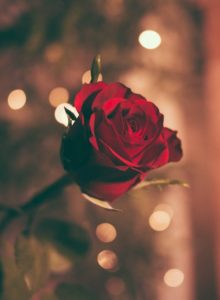 It’s Love Month and my prince, on the 15th February, yelled from his office to mine “Happy Valentine’s day for yesterday, Honey”. But that’s okay, because luckily, I have his heart 365.25 days a year.

Consider all the glorious, passionate love stories in history or Shakespeare. They were mostly short lived. How easy it is to fall in “love” when you’re young and blinded by lust, and, like Romeo and Juliet, you’ll just die if you couldn’t be together forever.

For me, the real test of love lies in time.

Time brings out the worst in us all. Complacency is a killer. Taking your partner for granted is the kiss of death for a happy long relationship, and it’s so easy to do when you’re with someone for 7, 14, 21, 35 years and more.

With that in mind…here is my ultimate love story:

My writing inspiration and one-time TV series-writing partner Martha is my hero. She was a hot shot advertising gal in Chicago when only Mad Men were in that business. Martha married Bill later than was usual for her generation. Bill is 10 years older than Martha. Over our many years of monthly lunches, Martha – a well-known author under various pen names – made me laugh till I cried about her and Bill’s antics. It was clear they adored each other and most importantly, made the other laugh through thick and thin. Their humor kept it fresh for them for 48 years.

In his 80s, Bill had a terrible fall and fractured his vertebrae. In hospital an infection attached to the lead wire of his pacemaker. His body raged with fever and delirium for weeks because of a new-found sensitivity to antibiotics. Martha thought she’d lost him a dozen times.

For 16 weeks Bill struggled, weak and confused. Martha spent every single day from morn till eve at his bedside, talking to him, singing to him, sharing memories, and laughing for both of them. He was in and out of consciousness and mostly delirious.

A deluge of doctors told Martha there was no hope but for Bill to stay in there and live out his days. He was too crushed by his body’s relentless fight to ever recover. There was nothing more they could do.

Martha refused to believe them. Against all odds and against everybody’s strong advice to the contrary, my Marths took her Bill home.

How she struggled. I know this only because I know my Marths, not because she said so.

She told me on our rare visits almost a year later – when she could get a family member to watch Bill – the saddest thing for her was her beloved husband had lost his humor.

In all the years I’d known Martha, I’d never seen her cry, until that confession.

Bringing her Bill back in every sense was her primary objective. Nothing else mattered. Ever so gently, she forced him to walk again. Every day she’d take him for a drive, talking to him as if he was her “old” Bill. She refused to let her husband die, mentally or physically.

Through an unexpected windfall, Martha was able to add a pool to her very private back yard. The noise and pandemonium during the months and months of installing the pool, played havoc with Bill’s new state of mind, but Martha soothed and promised her Bill that the end result would be more than he could ever dream of.

When at last the pool was filled with aqua water, Martha asked if he’d ever been skinny dipping. His eyes grew wide in their new innocence as she promised he’d really enjoy it. She’d purchased Velcro sarongs so they could get in and out of the pool without flashing the neighbors.

She described – as only a writer can – Bill’s face as she called for him to come closer-closer each time she dodged his reach until his frail body was submerged in blue weightlessness. She had two noodles ready to help keep him afloat.

For a long, blessed moment, her “old” Bill was back.

It’s been three years and Bill gets stronger, both physically and mentally every day. Martha is grateful for his every laugh and each day she gets new glimpses of her old Bill.

My gift was to see my Marths at the Master Class my STAR chapter of RWA brilliantly showcased last Saturday. She drove 60 miles or more to be there.

My huge surprise and delight at seeing Martha was quickly shrouded by concern.

“You could leave Bill?” I asked, apprehension and fear gnawing at my gut.

But Martha smiled in the way only a woman who really loves a man can.

“Sure. He has a jigsaw puzzle – a good one – that’ll keep him busy and my brother will check on him this afternoon.” Martha smiled and winked. “And I promised him a swim when I get home.”

Now that, my friend, is true freakin’ love