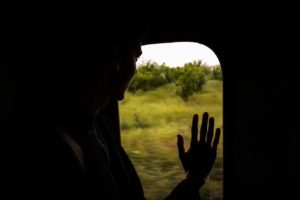 Coming to live in America from South Africa in the late 80s was steeped in differences, but not for obvious reasons.

Yes, we spoke the same language, but we held our forks in left hands; drove on the “right” side of the road; and we said “Have a nice day,” and meant it. We bought our trendy threads at boutiques not voluminous clothing stores with too many choices.

Our norm was to endure an airport-worthy, single-body-scan-tubes before entering our local bank to draw money.  Imagine then, the shock of cruising casually in and out of a drive-through to cash a check! The chasm was as wide as being served a cup of bleach with a plate of bacon!

But the REAL gap in our cultures was in the way we said goodbye.

Those of us brought up this way will never lose our uniquely South African goodbye-isms. But world-wide television, international movies, and social media influenced the generations that followed. The world is miniscule now, and cultures blend and fuse and traditions fade. Well, some…

In fact, the SA “Cheers, thanks for coming,” “Sala kahle,” “Totsiens,” “Love you – byeeeeee’s,” may be lost the world over…but not in our house! Ask our daughter who BEGS us to stay indoors when her family departs. But no such luck, we embarrass her clan all the way down the street. It’s just what we do.

When you invite visitors into your home in South Africa, no matter what the occasion, at a “decent” point at the end of the visit, a silent alarm goes off. It’s heard only by your guests who stand up together like a claque of paid enthusiasts during the final aria at the opera. Though your bed’s calling all-too-loudly, your body can’t succumb to weariness just yet. You have another hour beyond the front door. There is no getting away from it.

So buck up and pucker.

You see, saying “goodbye” in South Africa is much more important than “hello.”

No-one likes to leave the party first because a) it “interrupts the atmosphere” and b) the early-leavers won’t be privy to the best part of the social gathering – the inevitable goodbye that soothes and smooths and un-implicates and un-complicates and apologizes if need be, so guests and hosts can go their separate ways sans ruffled feathers or misunderstood innuendoes, feeling light and joyful, like it was the visit of a lifetime.

It goes like this: The inaudible alert is picked up by SA guests’ invisible antenna and they rise as one, gather handbags and leftovers, and head en masse to the front door. Once collected on the front stoep (as our porches are known), the front door closes (to keep the dogs in) and you – the gracious host – and your guests inch – one step at a time – toward waiting cars. This ritual lasts an hour. Anything less would be considered rude and render the evening entirely unsatisfying.

Our tip of the world is notorious for its angry weather patterns, but rest assured, not hail nor sleet nor mighty wind nor deluge nor lightning strike, will mar or shorten the length of the goodbye.

No matter what your relationship with your visitors: friends, aunts, uncles, mothers, fathers, grandkids, sisters, sister’s-ugly-husbands, friends’ boyfriends, friends-just-out-of-the-box, old friends, children – everyone is kissed on the lips three or four times during the hour-long process. (Nothing obscene y’hear, just a customary peck showing affection/acceptance/thanks/gratitude/sympathy…or anything a chaste kiss can decently convey.)

Random hugging-with-meaning is also big. Again – nothing creepy here – all strictly above board and doused with decorum, but the huggers put some strength behind the movement and the hug-ees respond accordingly. A few new conversations might start, old ones are clarified, jokes are explained, apologies are made for misunderstandings, differences are ironed out, and unanswered questions are clarified. By the time guests reach their cars, everyone is crystal clear on the loveliness of the evening and can’t wait to do it again soon.

SO! Just imagine the first time my Athol and I were invited to an American couple’s party. What? People just left WHEN THEY FELT LIKE IT? No! Surely not! We watched, mouths open in shock as guests drifted off on a whim, without saying goodbye to us or – God forbid – their hosts! We were mortified. Had we offended these people without knowing it? Had they sullied the atmosphere so darkly they were ousted unceremoniously? OH! My mother would be appalled!

We waited far beyond having fun for the mystical signal to move collectively with the balance of the party to the front door. Nothing happened.

When we couldn’t stay awake a minute longer, knowing full well we were shaming our parents and our parents-parents-parents, we sought out the hosts to thank them. They walked us to the front door with little ado, hugged us loosely, opened the door, and not a nanosecond after our noses hit the cool air, the front door hit us on the arse/ass.

I probably cried for days (yeah, I’m sensitive). Oh, such dismal guests were we, we didn’t even warrant a step beyond the threshold. Where had we disappointed? How had we failed? I just thanked our lucky stars we didn’t think of them as “close” just yet, and tried to erase our shame.

When we saw them again in passing, they seemed absurdly thrilled. We were confused and socially discombobulated.

The second gathering was equally as discordant when it came to saying goodbye. We were the only couple visiting and thankfully did well enough to earn a couple of loose cheerio-hugs before the door opened. Though we were partially prepared for the front door to hit us on the bum, the real kicker came (if you’ll pardon the pun) when THE STOEP LIGHT WENT OUT before we made it to the front steps!

Well! There was no denying it. We were social outcasts. We were the lepers of our new society.

Thirty plus years later, though we’re long past expecting the goodbye we were raised on, old habits die hard. On the rare occasion we entertain, we stand on our stoep watching our guests leave. Come torrents of rain or a plague of love bugs (fornicating Florida flyers that awake twice year just to breed – beat that Sleeping Beauty!), nothing deters us from waving to those who’ve just shared our home until we can no longer see them.

Truth is, none of my American friends think to acknowledge me standing there flapping like a dazed flag on a windy October in Kansas as they concentrate on starting their cars and focus on their next call of duty.

I can imagine how this generations-old tradition came to be. There were hungry lions and prowling leopards and herds of elephant and grumpy rhinos and lethal spiders and deadly snakes between your house and mine in the days of yore in South Africa. Evolve those hazards to bad drivers, drunk drivers, texting drivers, heart conditions, and sh*t happens…then the distance between your house and mine is still as far and every bit as dangerous.

So…just in case…what better way to make sure your last memory of me and mine, and mine of you and yours is pure and true than a cathartic goodbye?

Don’t feel bad, I love you all anyway. But now I hope you’ll understand why my weird, deeply inbred South African ritual of saying a “proper” goodbye compels me to spend as long as I can looking at your face, hearing your voice, and letting you know I appreciate you by waving like a loon.

So wave back at me, will ya? Just in case we never see each other again…at least in this lifetime.

Goodbye Trish Campbell 5-2-2019. I shall miss you, my giraffe-lover. Trishie, I only wish I’d spent more time with you on the stoep. Xx

Our time on the stoep culminated in a reveal second to none, Lindsay K. Davis. I hope, like all of my welcome guests, you’ll pop in whenever you have the urge. You single-handedly germinated and cultivated my online presence and your creativity eased War Serenade out of her box. Thank you, my Linds. I feel honored I could witness you shaping your magnificent young wings. Now soar like the eagle you are!