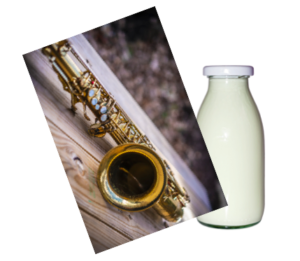 I grew up in a musical family. My mother occasionally taught syncopation, my father played the harmonica like James Cotton. Our house was filled with everything from Beethoven’s Fifth Symphony to honky tonk. When they weren’t practicing, jamming, or having sing-songs with their friends, they danced to tunes emitting loudly from the record player. There was something about French in my house. Whenever “La Vie en Rose” played on the radio, my dad would dip my mom in a seductive tango over the bubbling dinner gravy, while dogs barked, and I twirled in my new ballet shoes.

The only reason my mom schlepped me to ballet was because she’d discovered that her last child had zip/zilch/nada/niks musical talent in under 10 minutes.

After 7.9 minutes of my first piano lesson with her, my mother declared I had no aptitude for her beloved instrument. I was relegated to playing the milk bottle.  The three sometimes four of us would jam in our dining room which tripled as a pub and a music room. Three experts showing off their skills: my dad played a magnificent “Flight of The Bumble Bee”; my mom’s nimble fingers brought “The Rustle of Spring” to life; my sister Viv – between husbands – would squeeze and pull her accordion to produce a decent rendition of Boere musiek… And then there was me.

“Clink, clink, clink” went the sound of my spoon hitting the top of the empty milk bottle. Clearly even this tame, one-key “instrument” was above my musical intellect because my mother managed to tinkle the ivories with one hand and cover an ear with the other: The universal indicator for my being ridiculously off-key or out of sync.

So, when I announced to the world that I wanted a saxophone for my 33rd birthday and my goal was to play “Blue Moon” in six months, no-one laughed louder than my mother. I heard her 8,000 miles away.

My husband and champion supporter said “Wonderful idea,” though he was very familiar with my familial history as the musical black sheep.

So, on the morning of my 33rd birthday, there lay a perfectly shiny, hugely complicated brass instrument at the bottom of our bed. I was thrilled. I had never seen so much complexity before 7 a.m.

Being the thoughtful man he is, there was a coupon book holding six months’ worth of saxophone lessons. I was beside myself with anticipation.

I worked for an airline reservations company. When we arrived for our shift, we just filled a desk, any desk that was unoccupied on the res floor. As a result you got to know lots of co-workers, at least for those eight hours. Every Wednesday at four, I’d switch off my headset and hands in the air I’d declare, “I’m off for my sax lesson.”

But alas, from the first time my poor sax teacher guided my lips to the reed, he must have realized that I was his professional penance. First, I had to learn music because having – in 7.9 minutes – established my lack of talent, my mother certainly couldn’t waste her precious time teaching me notes I could never play. And second, and much more difficult, I had to make the bloody brass thing make a noise. Any noise at all!

Colleagues I didn’t know came up to me in passing “How are your lessons going?” Their kindness was astounding.

“Oh, I’m so excited. I can’t wait to learn to master this sax thing” I’d reply enthusiastically in those first two weeks.

Soon after that, their animated questions would be answered truthfully: “Well, I’m really not very good.” Or “My teacher is giving up on me, I’m useless.” I was surprised and dare I say, quite chuffed they took such a keen interest.

When finally a squawk emitted (on my 3rd lesson?) both the instructor and I jumped. But my musical family also taught me never to give up (though my mata was clearly excluded from this code when it applied to me) so I continued making the announcement that I was off to my sax lessons more for the interest? awe? humor? puzzlement? on my colleague’s faces, than for what I accomplished in my music-less hour of tuition.

My husband, a fine singer and lover of music picked up the sax in that first week, and really pissed me off. He was able to squeeze a sound out of the brass bitch! And a decent one at that! I would come home from work, and he’d look sheepish. I’d find not a lithe maiden in our bed, but a wet reed in my saxophone. He was cheating on me by getting the bitch to talk his language!

And so it was I faced my own inability. My mother was right. “Blue Moon” would have to wait for my reincarnation. But I realized that my fellow could do what I couldn’t, so for his birthday six weeks after mine, I traded in my secondhand tenor sax for a big bad-boy alto. I have never seen such relief on a face as that of my sax teacher when I asked him to credit the balance of my lessons to my husband. Swine!

By now the whole building seemed to check in with me on a Wednesday “Where are you going?” they’d ask. And I’d have to confess: “Man! I just cannot master this sax thing!”

“Practice makes perfect!” they’d chirp or “Just go with your instinct,” they’d encourage – always with a naughty smile. So kind. So supportive.

So July came and went, and my honey, with his own brass beauty, had learned music in a week and had his first tune down in two. I was happy for him, and over my dismal lack of achievement. At work, when asked, I declared: “I was hopeless. My husband took over my sax lessons,” and they giggled.

One day at lunch, when a bunch of them were sitting together they called me over and asked, “So, you were useless?” “So you just gave up?” “Didn’t anyone step in to help you?” “I heard your husband needs lessons now…”

I was embarrassed. One doesn’t like one’s nose rubbed into ones pathetic, poopy failures.

But then I’m one to fess up. “I just don’t have the skills,” I said hanging my head in shame.

Laughter erupted. Not titters. No, Sireeee. It was long past that. These were gut guffaws, the kind of hilarity that’s pent up for ages, and then finally erupts like a volcano.

I must have stood with this WTF look on my face for 3 long minutes while they regained their composure.

“Why?” I asked, hurt to the quick. “Why do you care about my lessons? About my failure?”

It started again – that laughter that removes the spine – leaving you like an eel flopping this way and that. They beat hands on the table and slapped thighs before mirth knocked them back in their chairs. When one of them finally came up for air, he addressed me, trying to keep his smile from erupting into a snort of laughter: “Okay. Once and for all, what kind of lessons did you take?”

“What?” he asked, hand behind his ear. The silence that followed was riveting but faces seemed about to burst for some odd reason.

“SAX” I shouted, furious.  The floppy eel-people were back…but I’d had enough. Thoroughly pissed, I turned to leave.

I couldn’t pull away. He continued: “Please explain why you feel you have to pay for sex lessons. We could have scrounged up a few guys who would educate you for free.”

I turned purple and moved four states east. Literally. We left Kansas City for Montclair, Virginia days after that. My husband had a quick transfer, and I couldn’t pack quickly enough!

You see, my beloved American friends, my South African vowel sounds are very, very different from yours!

So, next time you hear an English girl or a “De-tribalized Brit” like me say something funky, delve a little before you judge.

And above all, remember: You say “Teh-may-doe” and I say “Tom-aaaahhh-toe”.