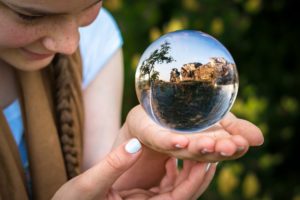 Before marriage, my friends and I were ravenous for a peep into our futures.

If I’d saved all the money I spent on fortune tellers over the years, I’d live in a home directly on the ocean. In Malibu.

Though we promised never to take our visits too seriously, most of the bad stuff lingered – like when our friend Kitty was told her brother would die “shortly.” Terrifying right? Fortunately he’s reached a ripe old age. Phew! We three friends can relax after 4.2 decades!

Tea leaves and Tarot cards were our staple. The general consensus from a multitude of mediums was I would travel the world, marry a man, have twins and live abroad. My mother had visions of an oil sheik or a Swiss baron in the family and planned her sunset years alternating between sipping Mimosa’s on yachts and swirling a mix of Schnapps & Bailey’s in a mountain castle.

Sure! I traveled the world courtesy of South African Airways. But as our 747s labored around the bulge of Africa for what felt like days, I earned my passage by walkin’ n smilin’ n servin’ every mile before I was liberated in Britain, Europe, the America’s, Australia or the Far East.

Of course, each captivating capital meant a new set of seers. I’ve had tea leaves tallied in Taipei, coffee beans dissected in Dubrovnik, and bumps on my head read by Phrenologists in Frankfurt.

Alas! I married my dream man. A South African. (My mom’s dreams of grandeur expired!) Three years later, we moved to America.  I just wanted dogs, but kids were apparently (ahem) on the cards for us.

Athol’s kids come from South Africa to stay with us 24/7 and I become the mom I never knew I wanted to be – Hey! Wait one darn minute…I got my kids at the same time. Twins? Must be!

Now my Athol is a complex soul. He owns the softest heart of anyone I know, but it’s brilliantly masked by a gruff exterior. He’s had his share of spiritual encounters though he’ll never tell you, and he’s an open minded fella – which is one of the reasons I’m really quite partial to him. But never take my man for a fool. And don’t mess with him.

In telling this long-ago-story I realized 3 things:

1) I must have recognized the softy in Athol immediately; otherwise we’re likely never to have had our happy ending and 2) He must’ve really, really liked me because my rugby-playing boyfriend as he was then, agreed (after nagging him into a coma) to see a “new” fortune teller my friends and I had discovered and 3.) See the last line for the real shocker!

We arrived at the spiritualist’s mansion. Athol waited in the car while I bounded upstairs. In the outer sanctum a fact-finding form was thrust at me to complete prior to my one-on-one. Nice, subtle (ahem) questions: age?/health?/marital status?/hopes and dreams?/who are you hoping to “speak” with today? I was unfazed by this “essential” preamble. The more The Chosen One knew about me in advance, the more likely we could skip the dance and get to the heavy breathing.

Quivering with anticipation, I was ushered into the inner sanctum. There was a man on a chair the size of Lilly Tomlin’s to accommodate his 553 pound bulk. He looked like he was reading my aura and talking to all of my spirit guides at the same time…WAIT! Perhaps he was finishing a mini-post-lunch siesta and his stomach was gurgling. A none-too-well-disguised burp could’ve confirmed my suspicions, but I chose to believe he was using sound waves to bring down the veil to reveal my guides.

I can’t for the life of me remember how enlightening my session was because of what followed, but I returned to the car to wait as Athol ascended the stairs to determine his own fate.

Ten minutes later, a hellofa hallabaloo interrupted the Eurthymics who were shouting about “Sweet Dreams” through Athol’s car speakers. Loud, booming voices came from the house.

Minutes later my fuming boyfriend stormed down the steps, his face an ominous thunder cloud.

Me: “What the hell happened?”

He: “That swine in the front office wanted me to fill in a form. No way. I took Demis a blank form.”

Me: “Demis?” I was perplexed. How did a Greek vocalist with a weight problem get up there without me noticing? I didn’t know Athol well enough to know how lousy he is with names – he makes them up as he goes along.

I got the parallel and hurried him to continue.

“The big bastard asked me why the form wasn’t filled in. I said HE was the psychic. HE should know about me without prompting. It’s his job. Why the hell did he think I paid him money? To retell what was on my form?”

Clearly, I had not given my beau Clairvoyant Preparedness sessions prior to this visit.

“He said he can’t tell me anything without the form. The screaming started about then. I told him he was a fraud, and I wanted my money back.”

I was agog, but my fellow continued: “He said the money is for his time. I told him his time’s worth nothing. He can’t tell me anything without NOTES…what the Bleep-Bleep-Bleep is the good of that?”

I felt my eyes go big as saucers. “Noooo. What happened next?”

He: “He said ‘I curse you. You’re an unreasonable idiot.’”

Saucer-sized eyes morphed into dinner plates on either side of my nose. I managed just a whisper: “…and then?”

He: “I said ‘Call me that again so I can blot you out right here.’ And he said ‘Please just leave’”.

Me: (incredulous): “Without your money?”

He: “Geeze, his forehead was giving off heat at 600 Degrees and he was puffing like an engine leaving the station in a hurry, so I thought I’d better get the hell out of there before a 553lb man exploded all over me.”

And then we heard a bellow so loud, we thought the sky had fallen. This giant man appeared on the balcony, face deep purple, caftan swirling like a storm gathering ominously. Fat fists pumped the sky.

We were deep in the doodie. Terrified, I hit the gas to distance us from Demis’ curse.

A few days later we stumbled across a newspaper obituary in The Star. It read: “Well-known, well-loved, well-respected medium progressed unexpectedly through the veil between this world and the next.”

It seems, in spite of “knowing” what’s to come life always has a wee surprise in store, doesn’t she?

Realization #3: Oops! I may have married a Fortune Teller Killer