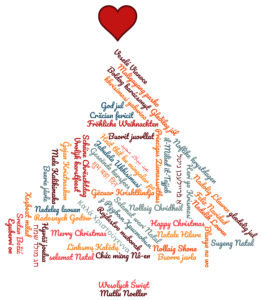 Growing up in South Africa we didn’t have Santa.

We had Father Christmas who still pops in to see us every year if we’re lucky ;o) Much like the U.S.A., South Africa is a melting pot of immigrants. The only real natives of South Africa are the San or Bushman people, so over the years we South Africans have merged traditions with those around us. ‘Monkey see, monkey do’, has made us marvelously adaptable.

To that point, when we lived in South West Africa (before it was Namibia) there wasn’t a German person in our broadest circle, but my family adopted the tradition of giving gifts on Christmas eve from the dominant German population. We moved back to South Africa five years later and there was no excuse for us to hang on to this tradition. But I suspect Father Christmas had become addicted to his quadruple shot of Johnny Walker the night before Christmas. The half full glass was left on the mantle as we all exited the lounge with the sparkling tree. When we all were allowed to re-enter, the glass was empty and presents lay under the Christmas tree. It was pure bliss!

We hung on to the tradition without apology and accepted that if there was a myth, it was that Father Christmas had a sweet tooth. We all knew he preferred whiskey.

Although much has changed, I fondly recall gorgeous South African Christmas days in the middle of summer. Always a time for outdoors and sun and pools and braai’s (or bbq’s) and tons of beers, boxes or bottles of wine (based on one’s degree of poshness) and liquors – Tia Maria was my mom’s favorite.  Loads of friends and family revolved in and out of our home – announced and otherwise, but all welcome.

The very next day is Boxing Day – so named for when our British ancestors boxed up their left overs for the less fortunate (OH! How benevolent!?!). Boxing Day in SA is just a clean-up-and-lets-do-Christmas-over-again-on-a smaller-scale-with-leftovers-and-loads-more-booze-and-no-presents. Clearly, we relaxed our stiff upper lips over the centuries, and became quite content to gorge on yesterday’s feast. (What’s that rustle? AH! Just my ancestors turning over in their graves.)